Brave Spaces was at World Alzheimer’s Month Conference on 21 September 2018 at the Devan Nair Institute for Employment and Employability. We would like to share our findings. 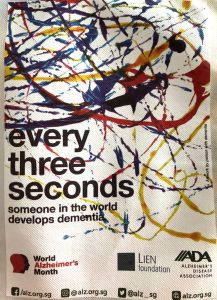 Dementia is a journey. Life does not come to a standstill immediately after diagnosis.

A person with dementia still has aspirations. Some have gone on to achieve second and third academic degrees.

It is beneficial for a person with dementia (PWD) to have a mentor.

What the world is like for the PWD – Sensory challenges, behavioural and emotional changes, no one seems to understand, unmet needs, social stigma, loss of driver’s license, prescribed disengagement, loss of motivation, being ignored at social functions, “people talking over my head about me as if I am not there”.

Spirituality has a positive impact on the emotional state of the PWD. PWDs often find comfort or connection to a higher power in the midst of the cognitive and physical changes brought on by their disease. Those living with dementia often cling to their religious practices or spiritual beliefs as a way to find peace, even when their world is changing from the inside out. Believing that there is something greater than them and their disease help them find perspective and stay positive throughout their struggles with dementia.

The Alzheimer’s Association of Singapore has a comprehensive list of resources which provide respite and support caregivers.

Your ticket for the: Living with Dementia – Learning Points at the World Alzheimer’s Month Conference